My introduction to Yoga is a vague memory that starts with an Ashtanga workshop in Norwich, UK with Hayley Winter. Its likely that I was attracted to the hype around the term Power / Dynamic yoga tagged to it at the time. Sure enough I discovered a challenging session along with strange looking veggie food at break time! I never would have imagined back then in the hazy mid to late 90s that I would eventually be practicing Yoga more than pumping weights.

Around that time I began my career in the fitness industry with an undergraduate focus on fitness & health.  On graduation I worked at health clubs providing 1-1 fitness instruction along with adult group exercise classes. I progressed to shuffling paper behind a desk and never forget the difficulty I often had trying to source Yoga teachers for the health club class timetable.I walked away from regarding members as units by choosing to become a self-employed Personal Trainer while continuing with group exercise. As for Yoga, I dabbled occasionally and used my own interpretation at the end of kickboxing classes – ‘good stretching for flexibility’ was the motto!
Since 2010  my interest in Yoga grew. I began with DVDs and locally attended classes at the Oriental Arts centre, gaining inspiration from Joss Guin and great 1-1 tuition from Barbara Ives (Yoga Norfolk) before signing up for a teacher training class with Abby Hoffmann in 2012. At this stage I enjoyed practising Yoga asana or poses but hadn’t delved into the philosophy, theory or history.
Although I had seen several fitness related Yoga courses I wanted more depth than what a fast-track course could offer. After some deliberation I signed up and began studying. I soon discovered a rich spiritual background which helped put into context the myths, traditions and esoteric beliefs. Some of my own prejudice towards what I considered the airy-fairiness was challenged.
I soon realised and accepted that,

Yoga is more than just stretching. 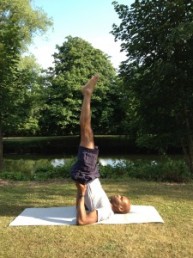 My Style
Today, I blend my background of anatomy and physiology with the physical side of Yoga and attract many to my classes looking for a 'no nonsense' modern alternative to the traditional perception of Yoga. However, in a hectic, secular electronic world the need for a physical and mental pit-stop is needed more than ever.  Although mindfulness may currently be fashionable, in these times I consider it essential - at the very least to stop..

... stop and learn to fully relax.

Using meditation and Yogic breathing techniques can help and this too is what I try to share in my practice sessions and classes.
Hopefully I can inspire you too :-)

This site uses Akismet to reduce spam. Learn how your comment data is processed.